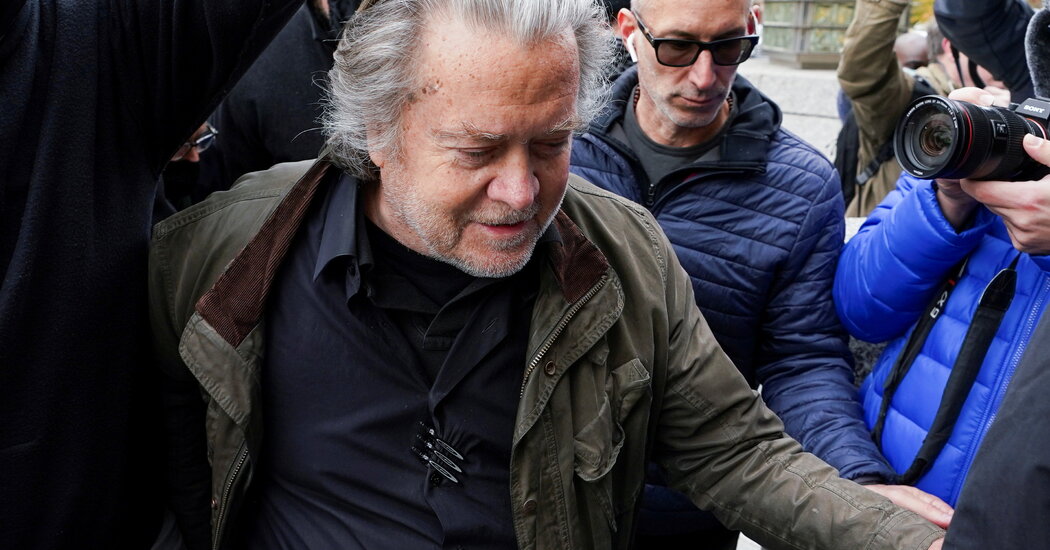 In Donald J. Trump’s final hours as president in January 2021, he pardoned his onetime chief strategist, Stephen K. Bannon, who faced charges that he had conspired to swindle donors to a private group that promised to build a wall along the Mexican border.

But three men charged with Mr. Bannon were not pardoned, and two of them pleaded guilty on Thursday in Federal District Court in Manhattan.

One was Brian Kolfage, an Air Force veteran from Miramar Beach, Fla., who lost both legs and an arm during his service in Iraq, and who founded the fund-raising campaign for the private We Build the Wall project, intended to further one of Mr. Trump’s signature political initiatives.

In court, Mr. Kolfage admitted to the judge, Analisa Torres, that he had conspired to illegally receive money from donations made to the project. Judge Torres noted that he had promised the public that “100 percent” of the donated money would be used to build the wall.

“Despite your promise,” Judge Torres said, “you made an agreement with others to keep a large sum of money for yourself.”

“That is correct,” Mr. Kolfage repeated.

Building a wall along the country’s southwestern border to repel migrants became a rallying cry for Mr. Trump throughout his presidency, and the charges against Mr. Bannon and his co-defendants suggested they had exploited the issue’s popularity among Trump supporters to dupe donors to their project for private gain.

“The defendants defrauded hundreds of thousands of donors, capitalizing on their interest in funding a border wall to raise millions of dollars, under the false pretense that all of that money would be spent on construction,” said Audrey Strauss, then the U.S. attorney in Manhattan, when the charges were announced in August 2020.

The other defendant who pleaded guilty on Thursday was Andrew Badolato, a venture capitalist from Sarasota, Fla. The fourth, Timothy Shea, of Castle Rock, Colo., had reached a tentative deal to plead guilty, but changed his mind, prosecutors said in a recent court filing. Mr. Shea is scheduled for trial on May 16.

The We Build the Wall case has been widely watched, initially because of Mr. Bannon’s connection and then, after his pardon, because the three less-well-connected defendants were left facing prosecution.

Mr. Bannon could still end up playing a part in the case if Mr. Shea goes to trial next month. For example, Mr. Shea’s lawyer, John C. Meringolo, has said in court papers that the defense plans to call Mr. Bannon as a witness.

“We don’t believe the government can prove their case beyond a reasonable doubt against Tim Shea,” Mr. Meringolo said by phone this week.

When the charges were announced, prosecutors said that in order to induce donors to contribute, Mr. Bannon and Mr. Kolfage “repeatedly and falsely assured the public” that Mr. Kolfage would “not take a penny in salary or compensation,” and that all the money raised would be used “in the execution of our mission and purpose.”

According to the indictment, the fund-raising campaign raised more than $25 million for the project.

But prosecutors said Mr. Bannon and his co-defendants misrepresented the true use of the donated funds.

The indictment accused Mr. Bannon of siphoning more than $1 million from the project through a nonprofit organization he controlled, and using the money, among other things, to pay Mr. Kolfage and to cover hundreds of thousands of dollars in Mr. Bannon’s personal expenses.

The indictment said Mr. Kolfage took more than $350,000 in donated funds and used that money to pay for home renovations, a luxury S.U.V., boat payments, a golf cart, cosmetic surgery and jewelry.

The two men are to be sentenced by Judge Torres on Sept. 6.

The charges against Mr. Kolfage carry a potential maximum sentence of 46 years in prison, the judge said in court. According to Mr. Kolfage’s plea deal, he and the government agree that, under sentencing guidelines, he faces a sentence of about four to five years.

Mr. Badolato, under the guidelines, faces a potential sentence of about 3½ to about four years, his agreement says.

Mr. Bannon remains under a separate investigation by the Manhattan district attorney’s office for his role in the project, according to 2021 news reports. Mr. Trump’s pardon of Mr. Bannon applied only to federal crimes, not to state offenses.

A spokeswoman for the Manhattan district attorney, Alvin Bragg, declined to comment.