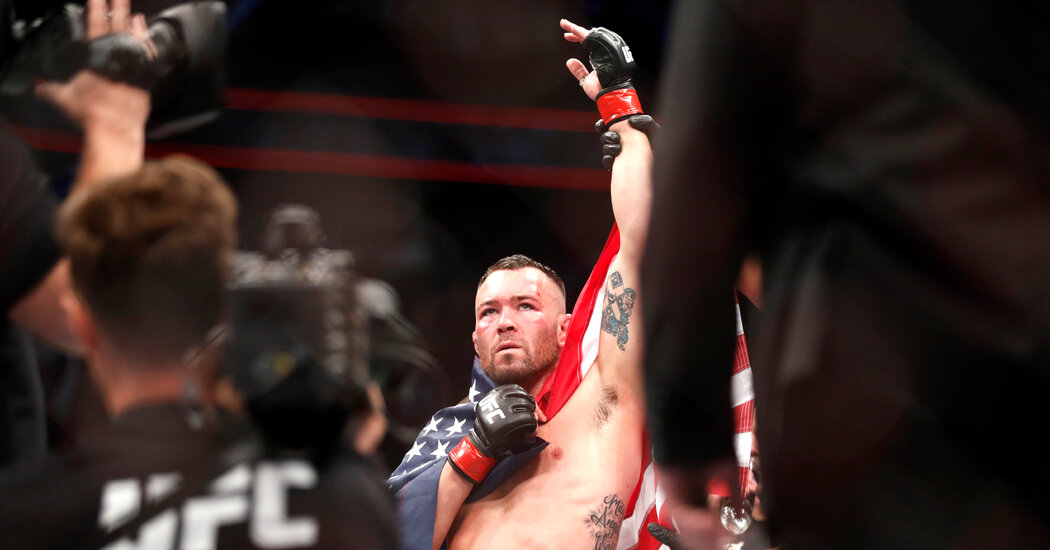 After a quick exchange of punches to open the final round of the main event at U.F.C. 272, the welterweight contender Colby Covington advanced on Jorge Masvidal, bulldozed him into the fence and dragged him to the canvas.

Some people at the sold-out T-Mobile Arena in Las Vegas booed Covington for dampening the action. The U.F.C. sold the bout between Covington, a former star wrestler at Oregon State, and Masvidal, a 37-year-old veteran who graduated from backyard fights in Miami to the sport’s major leagues, as a blood feud. And the pair did deliver action befitting a fight borne of genuine mutual dislike. By the fight’s midpoint, Covington’s ground-and-pound had bloodied Masvidal’s nose, and a Masvidal elbow strike had cut Covington above the left eye.

But it was still a competition, and Covington, 34, enjoyed a massive advantage when the fight went to the mat. So he controlled Masvidal in Round 5 the way he had in the previous four and earned a unanimous decision win.

And the bout was also big business, less because of the stakes than the characters involved. Masvidal was 2-2 in his last four bouts, but he is a reliable action fighter who eagerly indulges in pre-fight trash talk. Covington had lost two of his last three, but he has grown his following since rebranding himself as an outspoken right-wing antihero. Neither fighter entered Saturday as a champion, and each had lost recent challenges for Kamaru Usman’s welterweight title.

But Covington and Masvidal were close friends turned rivals. Saturday’s bout was a contest between athletes, but it was also a literal fight between real-life enemies, and the animosity helped sell the event.

According to Dana White, the U.F.C. president, the fight card attracted 19,425 spectators and generated $6.76 million in ticket revenue. While pay-per-view figures still were not available, White said he expected robust results.

“This fight outperformed the budget big time, just on the gate alone,” White said at a news conference.

Covington (17-3) and Masvidal (35-16) were each guaranteed a reported $500,000, though Masvidal, who signed a new contract with the U.F.C. last week, will also earn a bonus based on pay-per-view sales. Covington, however, fought for a flat fee.

“It wasn’t about money tonight,” said Covington, the U.F.C.’s top-ranked welterweight contender. “It was a personal rivalry that needed to get settled, and it got settled.”

The contract and its terms were among very few subjects Covington and Masvidal could agree on leading into the grudge match. They also both acknowledge that they became as close as brothers by training together after Covington, who grew up in Oregon, relocated to suburban Miami to start his mixed martial arts career. Covington moved in with Masvidal and his wife at the time, and the fighters routinely worked each other’s corners.

But in the lead-up to Saturday’s main event, they disagreed on most other topics.

Why did their friendship end?

Masvidal said they broke up over Covington’s refusal to pay a coach who worked with both of them, but Covington said Masvidal simply grew jealous of Covington’s rising profile.

Who got the better of their training sessions at American Top Team in Coconut Creek, Fla.?

Masvidal said he did, once he adjusted to Covington’s world-class wrestling skills. Covington maintained that he routinely manhandled Masvidal at practice.

And which man is the more loyal supporter of former President Donald J. Trump?

Masvidal claims that he is and that Covington is clueless about Trump’s policies. Covington wears “Make America Great Again” hats in public, and said he was in contact with Trump’s sons early last week.

But once the fighting went from verbal to physical, the stalemate ended and Covington imposed his wrestling skill and peerless conditioning on Masvidal.

Early in Round 1, Masvidal landed a kick to Covington’s right leg that left a red mark. Masvidal, because he was the more skilled striker, preferred to fight standing and at a distance.

Covington responded by forcing Masvidal to the fence and, eventually, to the ground, where the writhing, grappling, clutching and grinding favored the former college wrestler.

Masvidal inflicted some damage: An elbow strike cut Covington over the left eye, and another kick left a large welt on Covington’s left hamstring. But Covington controlled the fight, repeatedly dumping Masvidal to the mat and sapping his energy with long stretches of wrestling.

“He took my back and rode me pretty good,” Masvidal said. “It left me a little flat.”

Late in Round 4, Masvidal connected with a right hook that dropped Covington to a knee. But Masvidal couldn’t muster the energy to follow up. In one clinch, Masvidal, bleeding from the bridge of his nose, rested his head on Covington’s shoulder and drew some deep breaths.

Covington said he was dominant throughout the whole bout. “I was ready for five more rounds in the parking lot,” he said.