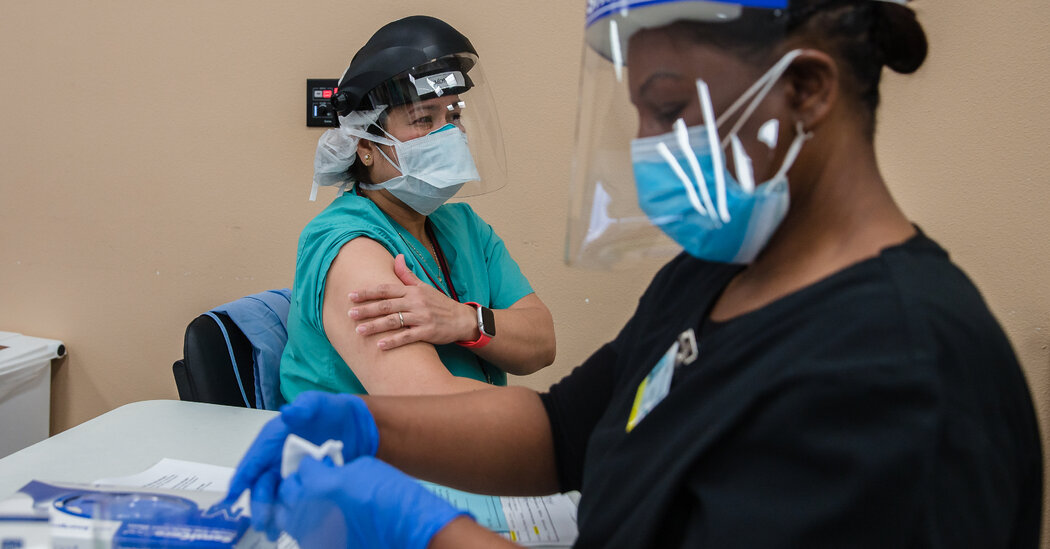 WASHINGTON — President Biden suggested on Friday that the government could offer coronavirus vaccine booster shots to most vaccinated adults sooner than eight months after a second shot, underscoring the administration’s concerns about the spread of the Delta variant.

Mr. Biden’s comments came during an Oval Office meeting with Prime Minister Naftali Bennett of Israel, whose government has already given booster shots to about a third of its population. Just nine days earlier, the president announced that his administration would begin offering third shots the week of Sept. 20 to adults who had received their second dose of the Pfizer-BioNTech or Moderna vaccines at least eight months ago.

But during the meeting with Mr. Bennett, Mr. Biden said his administration was weighing other options as well.

“We were going to start mid-September, but we’re considering the advice you’ve given that we should start earlier,” Mr. Biden said. “The question raised is should it be shorter than eight months? Should it be as little as five months? That’s being discussed.”

The White House press secretary, Jen Psaki, later played down the significance of Mr. Biden’s comments, saying the administration’s original eight-month proposal was unchanged. She said the president would continue to rely on guidance from federal health experts.

The Food and Drug Administration is racing to collect and analyze data from the vaccine manufacturers, the National Institutes of Health and elsewhere on the safety and efficacy of booster shots. Administration officials are meeting daily to discuss how to administer extra shots to vaccinated Americans.

While senior federal health officials appear to uniformly agree that booster shots are necessary, they and Mr. Biden have said repeatedly that they are contingent upon the F.D.A. determining that they are safe and effective, as well as on a recommendation from the Centers for Disease Control and Prevention to offer them.

But among some outside experts, Mr. Biden’s comments heightened concerns that the White House is pushing a broad plan for booster shots before regulators have had a chance to analyze the data. Dr. Carlos del Rio, an infectious disease specialist at Emory University, said the White House was implicitly putting pressure on the health agencies on whom the public relies for independent judgment.

“We have very strong science organizations like C.D.C. and F.D.A. They need to make the recommendations,” he said. “I’m frankly very upset that the administration is bypassing those very important scientific bodies that should be making those recommendations.”

Administration officials argue that they need to prepare the public for what lies ahead, even as the F.D.A. and the C.D.C. review the data that will guide whatever course is ultimately taken. At a news briefing this week, Dr. Vivek H. Murthy, the surgeon general, said the administration was striving to “preserve integrity of process, while still being transparent with the public, while still planning ahead and giving people a sense of what may come.”

If the F.D.A. decides that booster shots are safe and effective, the agency could recommend a minimum waiting period before vaccinated people can get one. The C.D.C.’s advisory board of experts would then meet to consider the F.D.A.’s decision and could advise the C.D.C. that booster shots be given within a period of several months after the second shot. An agency recommendation would follow.

Regardless of the time frame, officials said, the administration will strive to offer booster shots first to those who were inoculated earliest in the vaccination campaign because they are considered the most vulnerable. That would include nursing home residents and health care workers, followed by other older people.

Some health experts have criticized the booster plans as premature, saying the data shows that the vaccines still provide robust protection against severe Covid-19 disease and hospitalization. But administration officials have said that because they see the potency of the vaccines waning against infection, they fear that the bulwark they provide against severe disease may soon weaken.

Understand Vaccine and Mask Mandates in the U.S.

Vaccine rules. On Aug. 23, the Food and Drug Administration granted full approval to Pfizer-BioNTech’s coronavirus vaccine for people 16 and up, paving the way for an increase in mandates in both the public and private sectors. Private companies have been increasingly mandating vaccines for employees. Such mandates are legally allowed and have been upheld in court challenges.Mask rules. The Centers for Disease Control and Prevention in July recommended that all Americans, regardless of vaccination status, wear masks in indoor public places within areas experiencing outbreaks, a reversal of the guidance it offered in May. See where the C.D.C. guidance would apply, and where states have instituted their own mask policies. The battle over masks has become contentious in some states, with some local leaders defying state bans.College and universities. More than 400 colleges and universities are requiring students to be vaccinated against Covid-19. Almost all are in states that voted for President Biden.Schools. Both California and New York City have introduced vaccine mandates for education staff. A survey released in August found that many American parents of school-age children are opposed to mandated vaccines for students, but were more supportive of mask mandates for students, teachers and staff members who do not have their shots.  Hospitals and medical centers. Many hospitals and major health systems are requiring employees to get a Covid-19 vaccine, citing rising caseloads fueled by the Delta variant and stubbornly low vaccination rates in their communities, even within their work force.New York City. Proof of vaccination is required of workers and customers for indoor dining, gyms, performances and other indoor situations, although enforcement does not begin until Sept. 13. Teachers and other education workers in the city’s vast school system will need to have at least one vaccine dose by Sept. 27, without the option of weekly testing. City hospital workers must also get a vaccine or be subjected to weekly testing. Similar rules are in place for New York State employees.At the federal level. The Pentagon announced that it would seek to make coronavirus vaccinations mandatory for the country’s 1.3 million active-duty troops “no later” than the middle of September. President Biden announced that all civilian federal employees would have to be vaccinated against the coronavirus or submit to regular testing, social distancing, mask requirements and restrictions on most travel.

Federal officials have been closely watching Israel, whose vaccination campaign initially moved more quickly than the American one, and because — unlike the United States — it has a robust national surveillance program that tracks infections. Both countries are now awash in infections from the Delta variant.

The Israeli government relied heavily on the Pfizer vaccine for immunizations, and began offering booster shots on Aug. 1. On Tuesday, it expanded the booster campaign to people over the age of 30.

Some data from Israel’s Ministry of Health indicates a slow but steady rise in the rate of severe disease among vaccinated people 55 years or older from roughly late June to early August. That was followed by a tapering off of such cases — a trend that some analysts suggest shows the impact of booster shots.

At the Oval Office meeting on Friday, Mr. Bennett said Israel had found that a booster shot “is safe and it works.” He added, “The good news, finally, is that the tide is turning in Israel.”