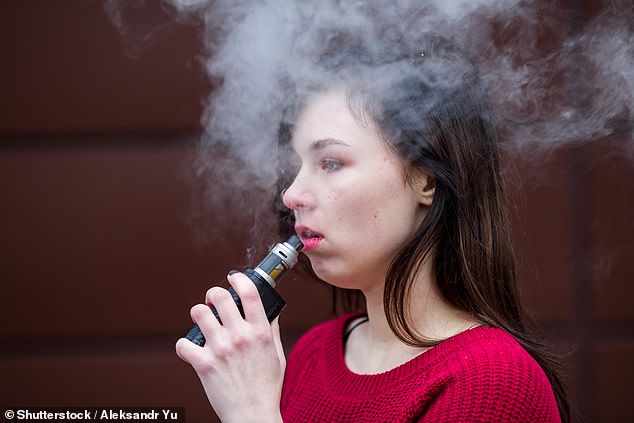 Vaping does not help teenagers give up cigarettes, according to a controversial study.

They say the proportion of teens who failed to kick the habit rose in 2020, bucking the declining trend seen since the late 1990s.

Separate analysis delving into vaping quit attempts revealed failure rates were twice as high, compared to those for traditional cigarettes.

But experts have poured cold water on the ‘flawed’ study, saying other, more robust, evidence shows the gadgets are helpful.

NHS watchdogs could soon approve e-cigarettes as a smoking-cessation tool, which would doctors to prescribe the devices to smokers.

What is an e-cigarette and how is it different to smoking tobacco?

An electronic cigarette (e-cigarette) is a device that allows users to inhale nicotine by heating a vapour from a solution that contain nicotine, propylene and flavourings.

But while they have been branded as carrying a lower risk than cigarettes, an increasing swell of studies is showing health dangers.

E-cigarettes do not produce tar or carbon monoxide, but the vapor does contain some harmful chemicals.

Nicotine is the highly addictive chemical which makes it difficult for smokers to quit.

Very similar to normal e-cigarettes but with sleeker design and, in the US, a higher concentration of nicotine. In the UK and EU limited to 20 mg/ml.

Thanks to its ‘nicotine salts’, manufacturers claim one pod delivers the amount of nicotine as a pack of cigarettes.

It is composed of an e-cigarette (battery and temperature control), and a pod of e-liquid which is inserted at the end.

It is known as a ‘heat not burn’ smokeless device, heating tobacco but not burning it (at 350C compared to 600C as normal cigarettes do).

The company claims this method lowers users’ exposure to carcinogen from burning tobacco.

Unsuccessful quit attempts by smokers are considered important in nicotine addiction studies because it ‘indicates a loss of autonomy’.

Academics compared survey data on smoking habits of 800,000 American school-children collected between 1997 and 2020.

They recorded whether teens had ever smoked, if they had ever tried to quit, and if they were successful in their attempts to stop.

While success rates for quitting smoking have improved almost year-on-year in the last decade, 2020 saw a reversal in the trend.

When analysing rates for e-cigarettes only, researchers claimed 4.1 per cent of attempts were unsuccessful.

This was lower than the successful quit rates for traditional cigarettes in every year of the survey since 2006.

He said: ‘The contribution of e-cigs to unsuccessful nicotine quit attempts among adolescents is substantial.’

But Dr Miech added that the results, published as a letter in JAMA, ‘warrant consideration as the US formulates policies to regulate e-cigarettes’.

England is set to become the first nation in the world to prescribe vaping in a bid to wean people off regular smoking, under controversial plans set out by the Health Secretary Sajid Javid.

But the jury is still out on whether they are useful as a quitting aid, with some studies suggesting they are no better than going cold turkey.

Earlier this month a University College London study found that vaping is not a gateway into regular cigarette use for most teenagers and young adults.

Dr Miech accepted having one year of data on vape use and a reliance on teens self-reporting their smoking habits may have skewed the findings.

Independent UK experts have said the study has a number of flaws which render its conclusions doubtful.

Professor Lion Shahab, an expert in health psychology at University College London was one of them.

He said: ‘Unfortunately this study is seriously flawed and tells us very little.’

Professor Shahab also said the authors had failed to account for the disruption in the 2020 data that might be due to the Covid pandemic.

And he said the implication of the paper, that e-cigarettes don’t help curb smoking rates, was not supported by other studies.

‘E-cigarettes have a clear role to play as part of a comprehensive smoking cessation strategy to achieve a smoke-free goal,’ he said.

Professor John Britton, an epidemiologist from University of Nottingham, said a rise in the number of people failing to quit smoking may actually be a positive.

He said it ‘may simply reflect an increase in the proportion who even trying, which is a good thing’.

Although they have fewer chemicals than traditional cigarettes, e-cigs aren’t risk-free and contain nicotine as well as several irritants that can harm the lungs.