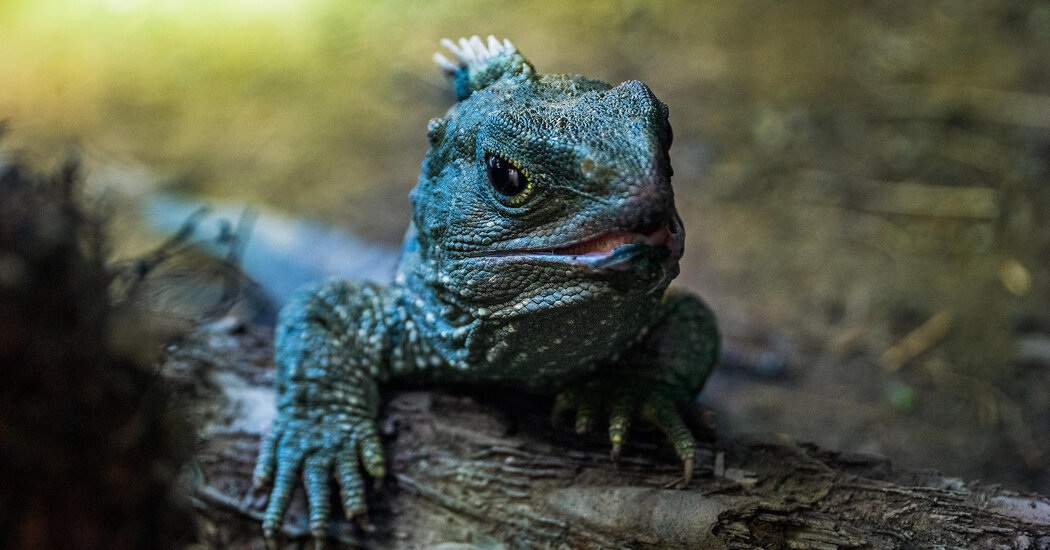 New Zealand’s tuataras look like somber iguanas. But these spiny reptiles are not actually lizards. Instead, they are the last remnant of a mysterious and ancient order of reptiles known as the Rhynchocephalians that mostly vanished after their heyday in the Jurassic period.

And they truly are the oddballs of the reptile family. Tuataras can live for more than a century, inhabit chilly climates and are able to slide their jaws back and forth to shear through insects, seabirds and each other. They even possess a rudimentary third eye below the scales on the top of their heads that may help them track the sun.

These bizarre traits make tuatara an evolutionary enigma, and a spotty fossil record of its long-lost kin has confounded paleontologists. Likely outcompeted by lizards and snakes, virtually all Rhynchocephalians went extinct at the close of the Mesozoic Era. Many left little more than dusty tooth and jaw fragments behind.

It turns out that a crucial piece of this puzzle has been sitting in a museum drawer for decades. While sifting through a backlog of fossils at Harvard University’s Museum of Comparative Zoology, Stephanie Pierce, the museum’s curator of vertebrate paleontology, and her team recently discovered the nearly complete skeleton of a lizardlike animal on a slab of stone small enough to fit in the palm of their hands.

The remarkable fossil was discovered in 1982 during an expedition to the Kayenta Formation, a fossil-rich outcrop in northern Arizona. This band of red rock was deposited during the early Jurassic period when the dinosaur reign was in its infancy. Around this primeval floodplain, early dinosaurs like the crested Dilophosaurus mingled with burly, crocodile-like creatures encased in armor. Underfoot scurried primitive, shrew-like mammals and this strange new reptile.

While fossils of the site’s early mammals garnered much of the initial interest, Dr. Pierce and Tiago Simões, a postdoctoral paleontologist at Harvard who specializes in the early evolution of lizards, have finally studied this specimen in depth.

In an article published Thursday in Communications Biology, the scientists named the new animal Navajosphenodon sani. Both the genus and species name (which means “old age” in the Navajo language) refer to the Navajo Tribe, who live in the area where the fossil was found.

The scientists employed micro-CT scans to investigate the squashed fossil in three dimensions and digitally pieced together the flattened skull like a puzzle.

Although its body was lizardlike, the structure of its skull resembled a tuatara. It sported similar rows of sharp, interlocking teeth extending directly from the jawbone. The skull also possessed two holes behind the animal’s eye. This configuration is one of the key traits differentiating tuataras from lizards, who only have one hole. The extra hole helps stabilize the skull as the tuatara bites down and saws through prey.

“All of these features are quite conspicuous to modern tuataras and are unlike what’s seen in any other modern reptiles,” Dr. Simões said. After a slew of statistical tests, the team slotted Navajosphenodon near the base of the tuatara lineage.

The fossil illustrates that the bodies of modern tuataras emerged in the Jurassic era and have changed little in 190 million years. This supports the popular distinction that these remnant reptiles are “living fossils.” But Dr. Simões emphasized the differences: For instance, modern tuatara jaws end in a set of beaklike fused teeth that are absent in Navajosphenodon.

According to Kelsey Jenkins, a doctoral student at Yale who specializes in early reptile evolution, many lineages of Rhynchocephalians exhibited little change throughout their history. However, 200 million years is extreme. “The only things that are that highly conserved are things like horseshoe crabs and cockroaches — not a decent-sized reptile,” said Ms. Jenkins, who was not involved with the new study.

Researchers argue this lack of change may represent natural selection on overdrive. “Slow rates of evolution don’t necessarily mean absence of evolution,” Dr. Simões said. Basically, it’s the evolutionary equivalent of the adage: “If it ain’t broke, don’t fix it.”

While the discovery of Navajosphenodon helps flesh out a crucial chapter in tuatara evolution, much of this reptile’s back story remains hazy. Without more fossil discoveries, it will be difficult for scientists to determine exactly why these lone survivors appear to possess evolutionary cheat codes.

“Why the modern tuataras and their lineages have evolved so slowly for such a long period of time is a bigger question and a bit harder to get at,” Dr. Pierce said. “We need more fossils.”