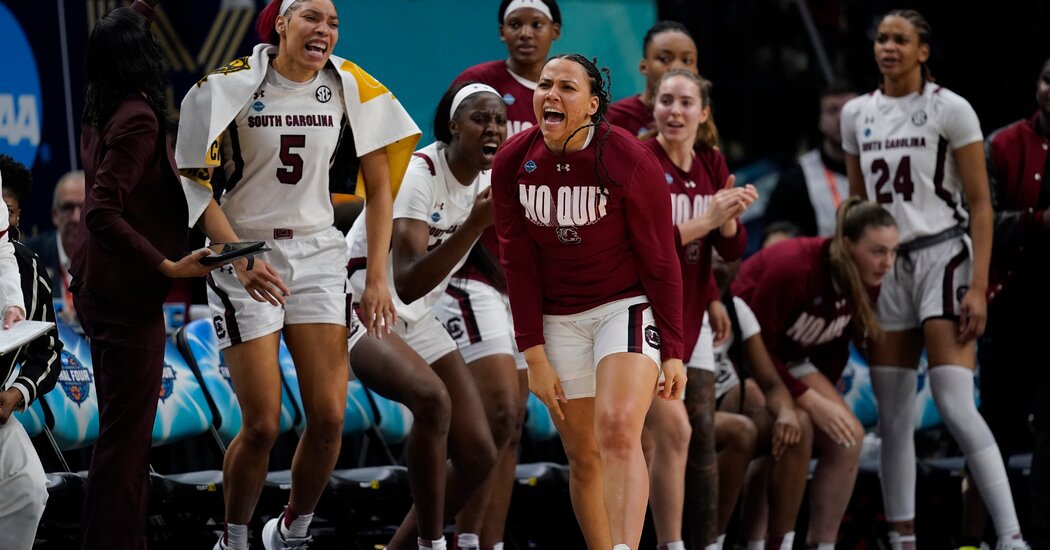 MINNEAPOLIS — It was a 40-minute championship game, yes.

But if South Carolina set out on Sunday to show that an N.C.A.A. title could be all but won in a contest’s first four minutes, even against a mighty, feisty, unbowed Connecticut, consider the hypothesis pressure-tested and proven on the sport’s greatest stage.

The makings of a rout would ebb in certain moments, but the Gamecocks eventually defeated the Huskies with ease, 64-49, to claim the second national championship in their history.

The principal trouble for UConn on a night full of them was that there was barely ever any time for a fight that never seemed all that fair.

By the first timeout of the evening, not even three and a half minutes into play, South Carolina had a 9-point lead and baskets from four starters. It had 7 second-chance points and 8 rebounds. UConn had a lone layup and, aside from a block, not much else that it would wish to watch again.

It was an early and emphatic seizure of the glory that UConn had always — always — cultivated in national championship games, an onslaught so thoroughly stunning and tone-setting that the thicket of basketball fans inside the Target Center could have been forgiven for wondering whether they had paid handsomely to stumble into a first-round tournament contest back in Columbia, S.C.

Instead, they saw South Carolina win its second title in six seasons. Under Coach Dawn Staley, who took over in Columbia in 2008 and on Sunday became the first coach to beat UConn’s Geno Auriemma in a national championship game, the Gamecocks have gone from a middling program to a marquee one that has become a mainstay of the postseason and as much a destination for prized recruits as any place in the nation.

And that was before Sunday’s showcase in Minneapolis.

But South Carolina, unlike injury-prone UConn, was a wire-to-wire favorite to reach the championship game and deliver a title. The Gamecocks opened the season ranked first in the Associated Press poll, a spot they never surrendered, with a roster that included five returning starters and 11 returning letterwinners.

Aliyah Boston, a 6-foot-5 junior forward from the United States Virgin Islands, was the centerpiece from the start, a one-woman juggernaut of the hardwood with a double-double as a career average and, by season’s end, a reputation as perhaps “the hardest person in America to guard,” as Auriemma marveled on Saturday.

“She scores if there’s one, two, three, four people on her,” Auriemma said. “It doesn’t matter. She’s able to carve out the space she wants. She gets the ball on the rim whenever she wants. She rebounds whichever ball she goes after. She just has a knack.”

She also had talent around her. Zia Cooke, a junior guard, arrived in Minneapolis with three 20-point games this season. Brea Beal proved herself as one of the most menacing defenders in all of women’s basketball. Destanni Henderson was a preternaturally speedy senior guard who was among the Southeastern Conference’s assist leaders, and Victaria Saxton, a forward from Rome, Ga., starred off the boards and in slapping down shots.

They would lose only twice — by 1 in overtime at Missouri on Dec. 30, and by 2 to Kentucky in the SEC tournament championship game — before they stormed through the N.C.A.A. tournament. Entering the game on Sunday, two days after every South Carolina starter posted double-digit scoring outings in the Final Four contest against Louisville, the Gamecocks were averaging almost 70 points per game, holding their rivals to less than 45 and dominating play off the boards, with a tournament rebounding margin of plus-19.4, the best in the field.

They were also exceptional at holding opponents to single-digit point totals per quarter. Entering Sunday’s game, the Gamecocks had done it 39 times. The Huskies were an improbable victim for the 40th edition. But there they were after the first, after the Gamecocks had gotten off more than twice as many shots and collected four times as many rebounds.

The Championship Games in the N.C.A.A. Tournaments

The national finals. March Madness is coming to an end, and the tournaments will culminate with the women’s and men’s national championship games on April 3 and April 4, respectively. Here’s a closer look at the matchups:

Women’s: South Carolina vs. Connecticut. The top-seeded South Carolina Gamecocks, which beat Louisville in the Final Four, will face perennial favorite UConn in the championship game. The Huskies defeated Stanford in the semifinals to earn their chance at a 12th national title.

Men’s: North Carolina vs. Kansas. After outlasting rival Duke in Coach Mike Krzyzewski’s final game, the North Carolina Tar Heels will play Kansas for the national title. The Jayhawks fended off Villanova in the Final Four, avenging their 2018 semifinal loss to the Wildcats.

Six South Carolina players scored in the first. Paige Bueckers, the extraordinary sophomore guard for UConn, managed not a point, and the Huskies finished the quarter trailing by 14.

The Huskies offense rumbled more in the second, with UConn’s rebounding improved sharply and Bueckers scoring 9 in the period. And although Boston played much of the quarter, UConn held her to no points. The South Carolina advantage, made possible by its overwhelming command and capitalization of the night’s second chances, fell to 8 by the intermission.

The Gamecocks would push their lead more in the third. But the game tightened sharply when South Carolina’s scoring entered a decidedly dry spell of more than four minutes without a bucket.

Bueckers, though, opened a 10-point run for the Huskies with a jumper, part of an effort that included 14 points and 6 rebounds on the night. When Evina Westbrook brought UConn’s margin to 6 with a 3-pointer, the team’s second successful shot from behind the arc in 30 seconds, the Target Center echoed as if Connecticut had planted a flag at midcourt.

But Henderson, who had scored the first points of the evening for South Carolina and easily led her team’s scoring on Sunday, with a career-high 26 points, promptly pushed the margin back to 9 for the start of the final quarter. Henderson and Saxton soon used a succession of layups and free throws to reconstruct a double-digit lead for the Gamecocks.

On Saturday, Henderson had preached how South Carolina would need to simply “listen to our game plan and execute that.” She talked about how it could be “a great game, a great 40 minutes.”

For the Gamecocks, maybe aside from the 22 seconds at the start when they were merely tied, it was. All Auriemma could do, after all this time, was stand on the sideline, his arms crossed.