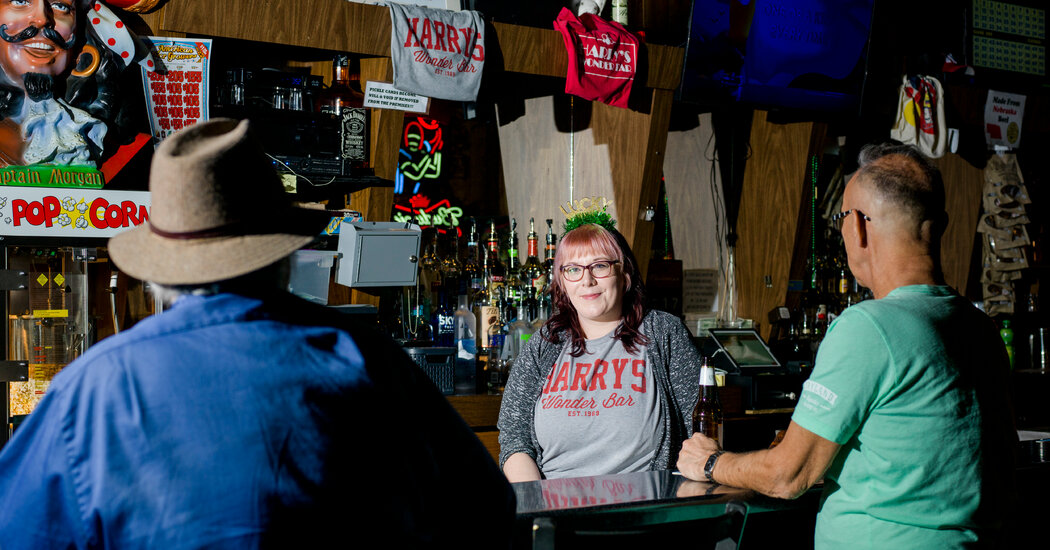 This morning, the Labor Department will report how many jobs employers added to their payrolls in March. Economists expect a healthy gain. But how much longer can the labor market keep it up?

Jobs may be approaching their as-good-as-it-gets moment. Employers have added half a million workers per month to payrolls, on average, for the past year, with some states close to their lowest-ever unemployment levels. (“I’m in hot demand, baby,” a bartender in Nebraska told The Times.) But a number of economists say that rising inflation and higher interest rates could soon shift the labor market into a lower gear. Goldman Sachs’s top economist, Jan Hatzius, predicts that the pace of hiring will slow to 200,000 a month over the next quarter, and drift downward from there.

The big problem is a lack of workers. Long before the pandemic, the percentage of Americans participating in the work force — those who had a job or were actively looking for one — had been declining. That had a lot to do with demographics, namely retiring Boomers. The participation rate has bounced up from its pandemic low, but has a ways to go to recover its prepandemic level, much less the higher rates of previous decades. If the long-term trend of falling participation rates resumes, “there will not be the numbers of people out there to fill these jobs,” Joel Naroff of Naroff Economics told DealBook.

The pandemic accelerated the drop in participation for all workers, not just older ones. It has also changed attitudes toward traditional ways of working. A recent poll by the work force management company MBO found that 30 percent of workers in full-time jobs and 70 percent of independent contractors think that they would have more job security if they worked for themselves. That’s up sharply from 2020.

Will the economy recover all of the jobs lost during the pandemic before the next downturn? The economy is roughly two million jobs short of its prepandemic peak. Goldman’s Hatzius forecasts that it would take until January to close that gap. That is, unless the U.S. slips into recession before then, a possibility that more market watchers have been discussing. “It’s a question of when we will have the next recession,” the Deloitte economist Daniel Bachman told DealBook. “Sometime, and it is likely to happen over the next 12 months, we are going to hit the job market’s upper limit.”

For full coverage of today’s jobs report, see The Times’s special briefing, which will be updated throughout the day.

Mortgage rates hit a four-year high. The average rate for a 30-year fixed mortgage rose to 4.67 percent, its highest level since 2018, according to Freddie Mac. While rates had been expected to rise, they have accelerated more than anticipated. Analysts said, however, that this was unlikely to deter buyers for now.

European leaders reject Moscow’s demand to pay for Russian gas in rubles. President Vladimir Putin has insisted that foreign buyers open ruble accounts with Russian banks by today, in a likely effort to shore up his country’s currency. But Germany and Italy, Russia’s two largest energy customers in Europe, said they would continue to pay in euros. It is unclear how the standoff will be resolved.

The Senate nears a deal on a $10 billion Covid aid package. That is less than half the White House’s original request, but would advance the stalled legislation after President Biden asked for more money to fund vaccinations and therapeutics.

A Critical Year for Electric Vehicles

The popularity of battery-powered cars is soaring worldwide, even as the overall auto market stagnates.

“No” votes are narrowly ahead in an Amazon warehouse union election. So far, 875 votes have been cast in favor of unionizing an Alabama warehouse, versus 993 against, though over 400 ballots are being challenged. But pro-union votes are leading at another Amazon warehouse, on Staten Island, which is expected to be finalized today.

Scientists introduce the first fully mapped human genome. The new results, announced this week, fill in gaps and correct errors in the initial 2003 map. The accomplishment, made possible by advances in genetic sequencing technology, could lead to future breakthroughs in medical research.

In recent years, when U.S. gas prices have risen, so have sales of hybrid, electric and compact vehicles. Yet with the average price of a gallon running at its highest in many years, S.U.V.s and other gas guzzlers are still being driven off lots.

It’s about trade-offs: A shortage of fuel-efficient cars has pushed the price of those available to the point where fewer consumers see a payoff in making the switch. That’s also reflected in the subdued performance of the stocks of many electric vehicle makers. Despite a spike in gas prices, shares of Lucid and Rivian have lagged the market this year. It was the same for Tesla until recently, with a big gain in recent days linked to a stock split.

E.V. investors are more worried about supply than demand. Nickel, a key Russian export, is a major component in electric vehicle batteries. Dan Ives, who covers E.V. stocks for Wedbush Securities, estimated that a shortage of nickel and other rising costs could force E.V. makers to raise prices by $1,200 per vehicle. That is weighing on the sector, he said, even if higher gas prices eventually lead to higher demand for electric cars. The pandemic also continues to be an issue: Volkswagen and Tesla temporarily shut factories in Shanghai this week, as a result of a lockdown there.

Policymakers are trying to do something about it. Yesterday, President Biden invoked the Defense Production Act to increase domestic production of minerals needed for electric vehicles, like nickel, lithium and cobalt. The president said that the country depended on “unreliable foreign sources” for many materials necessary for transitioning to the use of clean energy. The action isn’t expected to include loans or direct purchases, and may face opposition from environmentalists, including some in Biden’s own party.

“This is a transition, and transitions are painful. But near-zero interest rates weren’t sustainable. It will be a good thing if rates are higher. That should improve the outlook for stocks and bonds over the long term, once we get through it.”

— Joe Davis, the chief economist for Vanguard, on the outlook for the market as interest rates rise and bonds get pummeled.

Global M.&A. was worth just over $1 trillion in the first quarter, down 20 percent from the same time a year ago, according to Refinitiv. Deal makers had expected a slowdown from 2021’s record-setting pace, as rising inflation and the war in Ukraine made companies more cautious about what they do with their cash.

But the data also reveals a noteworthy appetite for very big deals: The value and volume of takeovers worth $10 billion was up sharply in the first quarter despite increased scrutiny from antitrust regulators and other factors that dampened enthusiasm for smaller deals.

Can the power of pop culture be harnessed to promote democracy? This question is what drove the CAA Foundation — the philanthropic arm of the Hollywood talent agency CAA — to team up with Democracy Works and create the Civic Alliance, a coalition of more than 1,250 companies supporting election engagement. Members include Amazon, Coca-Cola, Levi’s, McDonald’s, Microsoft and Starbucks.

“2020 was a tipping point,” Natalie Tran, the CAA Foundation’s executive director, told DealBook. “I don’t think we can go back from that. The expectations for civic engagement from businesses have transformed in the last two years.”

The origin story: Ahead of the 2020 presidential election, Tran had been seeking guidance on civics through a company lens. She wanted to promote engagement at CAA but wasn’t an expert and quickly discovered that people in her position at other companies were in search of similar information. They found little. “It’s impossible for businesses to respond to the engagement expectations without tools and resources,” Tran said. The alliance recently published the Corporate Civic Playbook, a guide it developed for members.

The playbook makes the business case for engagement. Based on the performance of the alliance’s publicly traded companies, civic engagement pays off: These companies outperformed the S&P 500 during the 2020 election campaign and in “the consequential moments for our democracy in the months that followed,” according to the alliance. “People always say democracy is good for business,” Tran said. “We wanted to prove that with data.”

The midterms are generating “presidential election energy,” Tran said. The alliance’s goal is to make civic engagement an every day, every election kind of thing, down to the local level, Tran said: “We’re equipping companies to build a sustainable culture of civic participation.”

The U.S. imposed sanctions on Russian technology companies to crack down on efforts to evade existing restrictions. (NYT)

The effects of sanctions on Russia are being felt throughout the start-up world. (FT Lex)

The Justice Department is investigating at least one meeting between Activision Blizzard’s C.E.O., Bobby Kotick, and a stepson of Barry Diller as part of an inquiry into unusual options trading days before the video game giant’s sale to Microsoft. (WSJ)

Carmakers seeking to compete with Tesla in electric vehicles are increasingly weighing buying some of their suppliers to speed up research and production. (Reuters)

SPACs are off to a slow start on the Hong Kong and Singapore stock markets. (FT)

“The investigation that threatens to sink U.S. solar” (FT)

A plan by Senator Rick Scott, Republican of Florida, that would impose income taxes on many Americans who now pay none, is drawing opposition from his own party. (NYT)

“She Took the White House Photos. Trump Moved to Take the Profit.” (NYT)

Best of the rest

“This Is What Happens When Globalization Breaks Down” (NYT)

Some Ivy League universities are playing down their low acceptance rates. (WSJ)

Patrick Demarchelier, the fashion photographer known for his portraits of supermodels and Princess Diana, has died. He was 78. (NYT)

We’d like your feedback! Please email thoughts and suggestions to dealbook@nytimes.com.