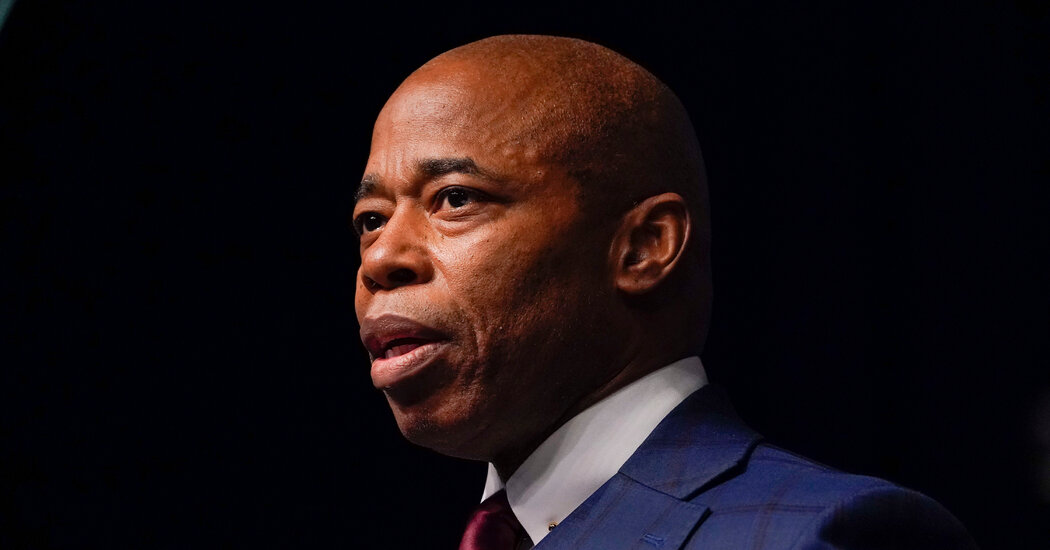 In his first months as mayor, Eric Adams has been almost singularly focused on New York City’s recovery from the pandemic, urging workers to return to offices and ending mask mandates for school-age children and vaccine mandates for restaurants and gyms.

Mr. Adams forged ahead with that effort on Tuesday, declaring an end to the city’s school mask mandate for children under 5 — his latest move to restore a sense of normalcy in a city battered by the coronavirus.

“We want to see our babies’ faces,” Mr. Adams said at a news conference at City Hall, announcing that the mandate would end on April 4 if cases remain low.

The move is sure to create some controversy in New York, where virus cases have increased slightly in the last week, and some health experts worry that an Omicron subvariant, which is known as BA.2 and is fueling a rise in cases in Europe, could lead to another surge in the city.

Many parents had criticized the mayor for retaining the mask mandate for preschool children, holding protests outside City Hall and heckling him on the street.

But the city’s new health commissioner, Dr. Ashwin Vasan, said late last week that he believed the mandate was necessary because younger children are not eligible for vaccination.

Dr. Vasan, who has a 2-year-old, said then, “I’d love nothing more than to send my kid to day care without a mask.”

On Tuesday, he said that he agreed with the mayor’s decision to end the mask requirement for younger children as long as virus cases remained low. Still, he stressed that removing the masks was optional.

“Let’s be respectful of whatever choice families make,” he said.

The mask mandate for children under 5 applies to the city’s 4-K and 3-K preschool classrooms, which serve about 95,000 students, and other preschool programs that have contracts with the Department of Education.

Earlier this month, when Mr. Adams eliminated a mask mandate for older students in kindergarten through 12th grades, he said he wanted to wait to make a decision for children under 5. The mayor said that he was concerned about their ineligibility for vaccination and about higher hospitalization rates in that age group during the recent Omicron surge.

Mr. Adams said he was willing to reverse his decision if the risk level in the city grows, adding that he would continue to follow the science.

But experts believe that the real number of cases might be higher because many people are testing at home and not reporting their results. State health officials said on Monday that the BA.2 sub-variant accounts for 42 percent of cases in New York State, but they did not expect it to cause a “steep surge” in cases.

Mr. Adams has called removing masks an important symbol of the city’s recovery. Two years into the pandemic, New York is facing many challenges: The unemployment rate has remained high at about 7.5 percent, roughly double the national average; office vacancy rates rose to 20 percent, the highest level in four decades; subway ridership is at about 60 percent of its prepandemic levels.

Mr. Adams has so far chosen to keep a vaccine mandate for private employers — a move that has prompted fierce criticism over Kyrie Irving, the Brooklyn Nets’ star point guard, being barred from playing in New York City. Mr. Adams defended his decision on Tuesday, saying that he wanted to remove additional pandemic restrictions “layer by layer” when it was safe, but that he would not be pressured to do anything before he is ready.

Dr. Jay Varma, an epidemiologist and top health adviser to former Mayor Bill de Blasio, said he would prefer that anyone who is unvaccinated wear a mask when interacting with others indoors. But he said he understands that Mr. Adams must weigh many issues to determine policy and said his decision was “reasonable.”

“I hope that the city works to provide high-quality masks to all regulated child care facilities so kids and staff have access to them if they want to wear them and to consider reinstituting masks if outbreaks occur or we have another resurgence,” Dr. Varma said.

When Mr. Adams has been out and about in the city, he has repeatedly faced questions from parents about requiring young children to wear masks. After visiting a bar last week on St. Patrick’s Day, Mr. Adams encountered a frustrated and angry parent holding a young girl in his arms.

“Don’t yell — you’re sending the wrong message to your daughter,” the mayor told the man. “I got this. I’ll take care of it. They’ll be unmasked.”