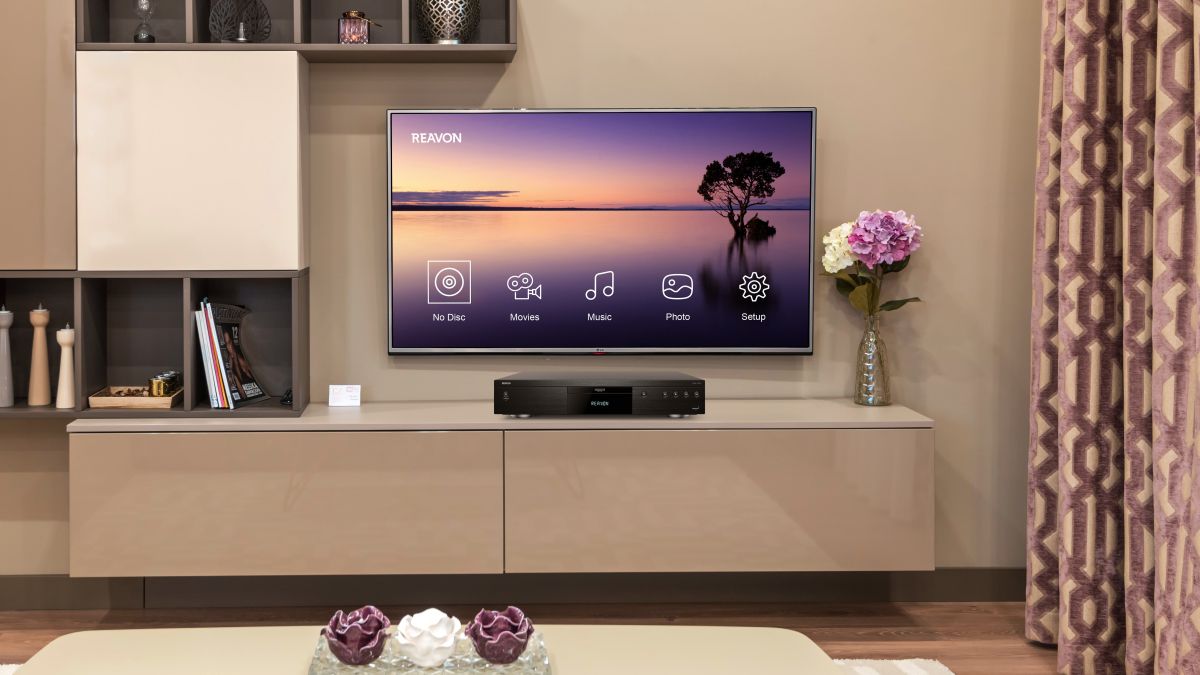 The Reavon UBR-X200 is a desirable high-end 4K Blu-ray player that brings military-grade construction and a stylish finish to the luxury end of the market. The disc support is extensive but not quite universal, and while this player can handle CD, SACD, DVD, or Blu-ray (Full HD, 3D and 4K variants), it can’t play the lossless layer on a DVD-Audio disc.

However, in all other respects it’s a highly capable deck that ensures UHD content is delivered perfectly, and lower resolution material is upscaled to 4K with artefact-free processing and pixel precision. There’s support for HDR10 and Dolby Vision, although not the less popular HDR10+ format, but that minor point aside the video performance is flawless.

The X200 includes audiophile Burr-Brown DACs, combined with balanced XLR and 7.1-channel analogue audio outputs, ensuring an impressive sonic performance. The result is a player that’s sure to please music and movie fans alike. The media file support is extensive, even if the lack of Wi-Fi forces you to use a wired connection, but there are no built-in streaming apps.

Ultimately, the X200 is an accomplished (if decidedly expensive) addition to the high-end UHD Blu-ray market that sadly just misses the mark in terms of universal playback. In short? Unless you’re in love with the looks, there are cheaper and better options.

French company Archisoft, who also manufacturer Zappiti media players, has developed the Reavon brand to fill the void in the high-end 4K disc player market caused by the departure of Oppo and the general unavailability of Pioneer’s disc spinners.

The Reavon UBR-X200 sports the same industrial design and weapon’s grade construction as the rest of the line-up: there’s a thick aluminium front plate with a black brushed metal finish that looks suitably eye-catching. In front, there’s a centrally mounted disc tray with a display underneath, a power button on the left, and some basic controls on the right.

The player feels incredibly solid thanks to the 1.6mm chassis base being reinforced by a 3mm steel plate to reduce mechanical vibrations caused by the disc spinning. There are also large feet that add greater support and further levels of isolation. In terms of size and weight, the X200 measures 430 x 85 x 300mm (WxHxD), and weighs in at 6.8kg, which is pretty heavy compared to the lighter disc spinners that Sony was making a few years ago.

Aside from a USB 2.0 port at the front, the other connections are at the rear. Here you’ll find twin HDMI outputs, with picture and sound from one, and audio only from the other for those needing to connect to a sound system that’s unable to pass features like 4K and HDR.

In terms of other digital connections there are coaxial and optical digital audio outputs, an Ethernet port, and a USB 3.0 port (although it would make more sense to have this at the front and the USB 2.0 port at the rear).

One of the X200’s big selling points is the inclusion of audiophile-grade analogue capabilities, with 7.1-channel phono outputs, and separate stereo outputs using phono and balanced XLR connectors.

The provided remote is big but comfortable to hold and easy to use with one hand. All the necessary controls are present and correct, with large buttons laid out in an intuitive fashion, and there’s even a useful backlight that’s activated when you press ‘light’.

The Reavon UBR-X200 can play CD, SACD (Super Audio CD), DVD, Blu-ray, 3D Blu-ray, and UHD Blu-ray discs, but isn’t quite universal because it can’t access the lossless layer on a DVD-Audio disc – although Reavon claims it will add this feature through a future firmware update.

In addition to the extensive disc playback, the X200 supports MKV, FLAC, AIFF, MP3, JPG, M4A, AIF, DSF, OGG and APE file formats, with only ISO folders and BDMV as non-starters. If you like streaming files from your home network you’ll have to use a wired connection because there’s no Wi-Fi capability, nor are there any built-in apps.

The X200 uses the popular Mediatek chipset found in a number of 4K disc spinners, so you get the same basic home page with options for discs, video files, music files, photos and setup. The latter contains sub-menus for Display, Audio, HDMI, Network, Language, Playback, and Options, but as a rule of thumb the default settings will generally prove best.

If you press the Setup button you can access the settings directly, but if you press it while a disc is playing you bring up the Video Parameters picture controls instead. These include brightness, contrast, colour, hue, sharpness, and noise reduction, but are best avoided because a player should only output what’s on the disc without molesting the signal.

Finally there’s the Info button, which provides playback information when pressed once, and when held down shows what the player is reading off the disc, and what it’s outputting to the display.

The Reavon UBR-X200 is whisper-quiet in operation, with the disc drawer smoothly sliding in and out, and the heavy chassis dampening any vibrations from the disc-drive. This is one of the big selling points of these expensive players and reinforces the feeling of a high-end product.

The player boots up speedily, and the loading times are equally as fast. As a result you can quickly access the disc’s menu page, and the performance is just as responsive when it comes to navigating around a disc’s menus and features.

The X200 correctly identified CD, SACD, DVD, Blu-ray, 3D Blu-ray and UHD Blu-ray platters, playing them all without any issues. As expected, with a DVD-Audio disc the player accessed the lossy Dolby Digital layer, but not the superior lossless alternative.

If you still watch DVDs the excellent deinterlacing and scaling will get the best from the standard definition disc format, producing images that are surprisingly good and free of any artefacts. This processing is even better with regular Blu-rays, upscaling 1080p to 4K and delivering a picture that looks almost UHD but without the benefits of higher dynamic range and wider colour gamuts.

The popularity of 3D may be on the wane, and supporting discs are increasingly hard to come by, but if you still have a collection of 3D discs and a display capable of handling the format, the Reavon will prove a highly capable playback device.

Of course, if you feed the X200 a UHD Blu-ray you’ll get the full monty in terms of picture benefits, with native 4K images, 10-bit video depth, higher frame rates, increased dynamic range, and wider colour gamuts. To a large extent the picture quality will depend on the capabilities of your specific display, but the X200 delivers exactly what’s on the disc in flawless fashion.

The player can handle HDR10 and Dolby Vision without any issues, although as previously mentioned there’s no support for HDR10+. The X200 outputs exactly what’s on the disc when it comes to HDR, and doesn’t apply any tone mapping itself. If you have a less capable display like a projector, you might find you’re better off with the Panasonic DP-UB9000, which has a dynamic tone mapping feature that can often prove very useful in getting the most out of dimmer displays.

The Reavon UBR-X200’s big selling point compared to its cheaper siblings is the the inclusion of audiophile-grade DACs and analogue outputs. The player has a set of 7.1-channel phono outputs combined with an eight-channel Burr-Brown PCM1690 DAC, along with separate stereo outputs that use a Burr-Brown PCM 1795 DAC and are offered on balanced XLR and phono connectors.

To further improve the analogue performance, the X200 is powered by a toroidal transformer which features low noise and low electromagnetic interference. This is mainly thanks to its shape and symmetry, which ensures the amount of magnetic flux that escapes outside the core is low and contained within its donut shape. The result is lower audio distortion and degradation to the sound quality, therefore ensuring that the resulting analogue outputs are clean and accurate.

The audio quality of the X200 is excellent in terms of its digital and analogue delivery. It handled the audio from CD, SACD, DVD and Blu-ray without any issues, and supports any sound format up to and including lossless high-resolution audio.

If you’re planning on just using the digital outputs you might as well buy the cheaper UBR-X110, which is otherwise identical, but the X200 is highly capable in this regard. The HDMI outputs can bitstream lossless audio formats like Dolby TrueHD and DTS-HD Master Audio, as well as decode them internally and output them as 7.1-channel PCM. In addition, if you want to enjoy immersive audio formats like Dolby Atmos and DTS:X, you’ll have to bitstream them via HDMI because these aren’t supported using the analogue outputs.

When it comes to the analogue audio, you can choose to output two-channel using the XLR or phono connectors, and you can use the 5.1/7.1-channel phono outputs for multichannel music. Which approach you take will largely depend on the capabilities of your sound system. However, when it comes to movie soundtracks you should definitely bitstream over HDMI if possible.

Anyone planning to use the analogue outputs will certainly be pleased with the results, and in testing the X200 we were really impressed with its clean and detailed delivery. Whether it was CD, SACD or high-resolution FLAC files, the sound quality retains plenty of dynamic range and is free of any compression.

The audio is also clear and well defined, no doubt thanks to the X200’s toroidal-based power supply. The player’s near-silent operation also benefits the performance, with no annoying noises to distract from the beautiful sonic delivery.

The X200 is sure to please even the most demanding music lover and audiophile, with a digital and analogue performance that makes it a capable high-end audio disc-player. However, if you’re not interested in SACD or extensive media file support, the equally well made and THX certified Panasonic DM-UB9000 has identical digital and analogue outputs, and is significantly cheaper.

You want a high-end audio disc playerThe X200’s Burr-Brown DACs and audiophile outputs deliver an impressive sonic performance, and will delight anyone looking to send analogue stereo or 7.1 signals to their sound system. In addition, there’s a full set of highly capable digital outputs, including an audio-only HDMI port.

You want flawless video playbackWhether it’s DVD, Blu-ray, 3D Blu-ray, or UHD Blu-ray, the X200 delivers a flawless performance, rendering exactly what’s on the disc with precision, and using state-of-the-art deinterlacing and scaling where necessary. The handling of HDR10 and Dolby Vision is equally as impressive.

You want SACD playbackThe X200 can play SACDs, allowing users to take full advantage of the player’s high-resolution DACs and audiophile analogue and digital outputs. However, if you’re not bothered about those analogue outputs, then Reavon’s cheaper UBR-X110 also supports SACD.

You want a universal disc player While the X200 can handle most formats, it is unable to read the lossless layer of DVD-Audio discs. Reavon is hoping to add this feature through a future firmware update, but if this format is important to you, try the cheaper Sony UBP-X1100ES (which also plays SACDs).

You want HDR dynamic tone mappingThe X200 outputs HDR10 exactly as it is on the disc, but for less capable displays such as projectors this can still result in a poor HDR experience. The Panasonic UB9000 includes highly effective built-in dynamic tone mapping that optimises HDR for different types of displays.