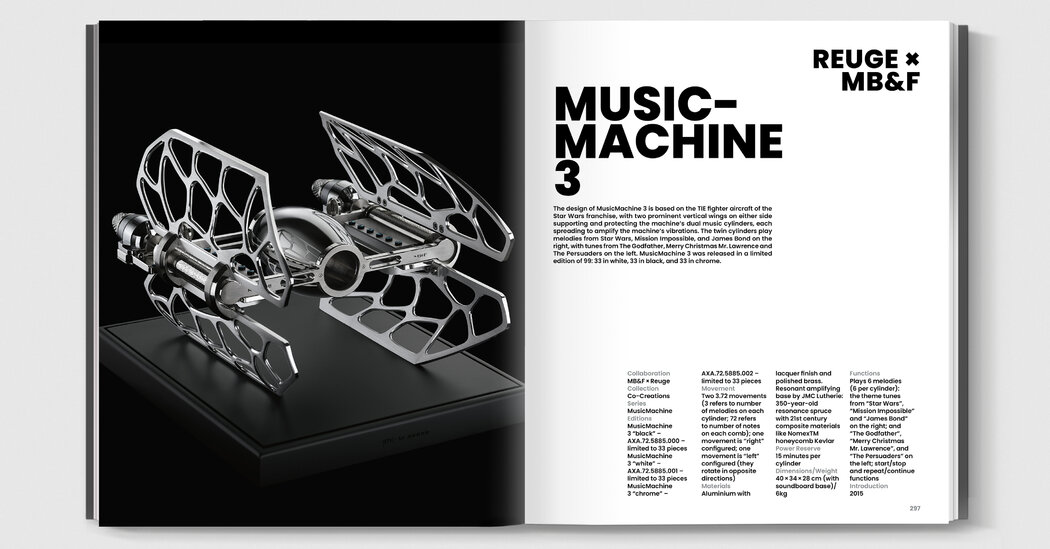 In the art world, publications called catalogues raisonnés are authoritative records of an artist’s complete works. And now, in what is being called a first in the watch world, “MB&F: The First Fifteen Years” is to be published later this year.

“A catalogue raisonné in watchmaking is totally unique and was unheard-of” before the MB&F book, Pascal Ravessoud, director of external affairs at the industry organization Fondation de la Haute Horlogerie, wrote in an email.

At age 55, he wasn’t ready to tell his life story just yet, “but,” he said, “there was this insane body of work that we produced. In 15 years, we created 18 calibers.” And when a customer had questions about a specific watch, Mr. Büsser said he could see the need for a comprehensive register of his company’s work.

Then William Massena — the watch specialist William Rohr who uses the surname Massena professionally — approached him with the idea of creating a catalogue raisonné and Mr. Büsser agreed to underwrite the costs, which he did not disclose.

Suzanne Wong, the watch expert and editor in chief of the online watch site WorldTempus, wrote the 30-page introduction that chronicles MB&F from its founding in 2005 until 2020. The rest of the 312 pages, compiled by Mr. Massena, details each of the brand’s calibers and includes reference numbers, technical specifications, the years of production and precise production totals for every one of its 160 references, accompanied by color photographs. It is to be published by La Martinière Groupe of France.

Mr. Ravessoud worked for Mr. Büsser during the years he headed Harry Winston’s watch division. “I am a great admirer of Max Büsser for what he has achieved in his (first) 15 years,” he wrote. The catalog is “an unprecedented endeavor in our world, and will actually give ideas to others! Or should!”

Book sellers, including Barnes & Noble and Amazon, expect to have copies of the book ($170 each) available for sale in October. And 1,500 copies, in special presentation boxes and priced at $220 each, are to be sold to MB&F clients and retailers in the summer. Pre-orders may be made at the watch brand’s M.A.D.Gallery eShop.