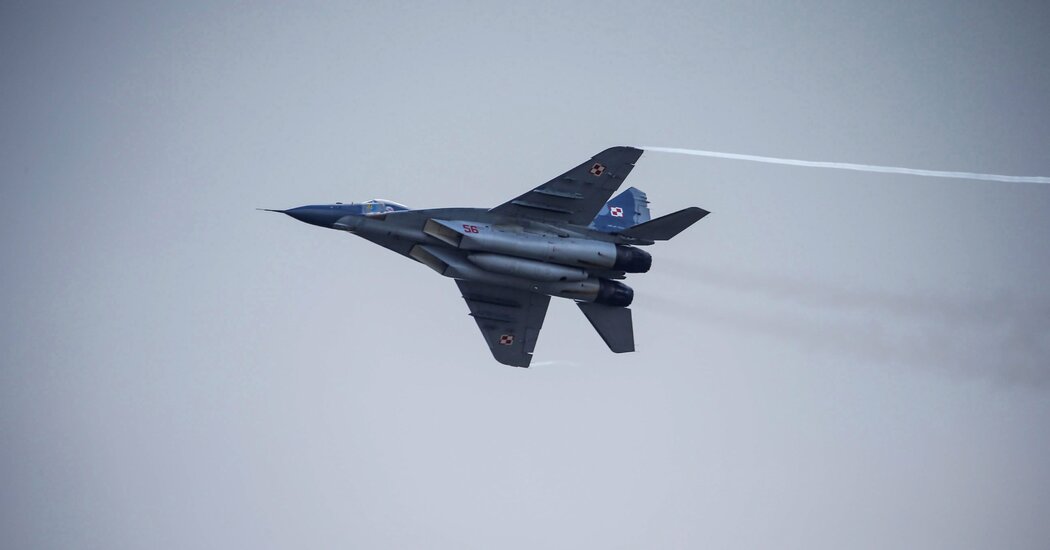 The Biden administration is discussing how to supply Polish Soviet-era fighter jets to Ukraine, American officials say, after President Volodymyr Zelensky made a passionate plea to American legislators on Saturday for assistance in obtaining more lethal military aid, especially Russian-made jets that Ukrainian pilots know how to fly.

The White House said a deal with Poland was being discussed that would replace Poland’s planes with American F-16s, but Polish officials seemed less than enthusiastic. After President Andrzej Duda said last week that Poland would not supply planes, the office of Prime Minister Mateusz Morawiecki wrote on Twitter on Sunday: “Poland won’t send its fighter jets to #Ukraine as well as allow to use its airports. We significantly help in many areas.”

A jet-supply arrangement would require congressional approval and is being discussed with other NATO countries. But any such supply would be a sovereign decision of the country involved, not a NATO decision, because NATO wants to avoid any direct conflict with the Russian military in Ukraine or over its airspace.

On Sunday, Secretary of State Antony J. Blinken, visiting Moldova, said the United States was exploring the idea of supplying jets to Poland should Warsaw choose to send its own to Ukraine.

“We are looking actively now at the question of airplanes that Poland may provide to Ukraine and looking at how we might be able to backfill, should Poland decide to supply those planes,” Mr. Blinken said. “I can’t speak to a timeline, but I can just say we’re looking at it very, very actively.”

There are numerous practical questions, including how to provide replacement planes to Poland and how to get the Polish planes to Ukraine. The next tranche of F-16s for export are set to go to Taiwan, American officials said, and they are reluctant to delay them.

Mr. Zelensky has regularly asked for NATO to create a no-fly zone over Ukraine to prevent Russian aircraft from bombing, but NATO has been adamant that it will not confront the Russian military in or over Ukraine.

Weapons to shoot down Russian planes, like ground-to-air Stinger missiles, are being sent into Ukraine in large numbers through its western borders, but it is not clear how easily they are being distributed to Ukrainian troops elsewhere in the country.

The European Union had explored the idea of supplying Soviet jets to Ukraine, and its foreign policy chief, Josep Borrell Fontelles, even promised them. But the idea was dropped. Among E.U. countries, only Poland, Slovakia and Bulgaria still use Soviet-era jets.

Bulgaria and Slovakia said last week that there was no deal to send fighter jets, and Mr. Duda, appearing Tuesday at a Polish air base alongside the secretary general of NATO, Jens Stoltenberg, said, “We are not sending any jets to Ukraine because that would open a military interference in the Ukrainian conflict.’’

“We are not joining that conflict,” Mr. Duda said. “NATO is not a party to that conflict. However, as I said, we are supporting Ukrainians with humanity aid. However, we are not going to send any jets to the Ukrainian airspace.”